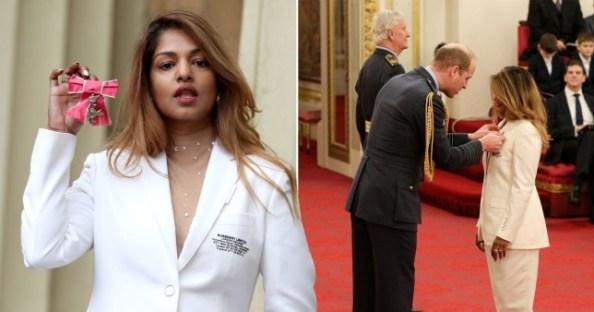 Sri Lankan born rapper M.I.A. was awarded the MBE after being recognised in the Queen’s Birthday Honours List.

The Paper Planes hit-maker was recognised in the Queen’s Birthday Honours List last year for her services to music and she made sure to get all dressed up, as she headed to Buckingham Palace to pick up her medal on Tuesday, Metro.co.uk reported.

M.I.A. (who’s real name is Mathangi Arulpragasam) oozed fashion in a stylish white Burberry suit, which she wore with a jewelled top underneath.

She got to chat to Prince William, who presented her with the honour, before posing with her medal in the grounds of Buckingham Palace and no doubt later celebrating with her mum.

The rapper chose to take her mother to the ceremony, after revealing back in June – when it was announced she had made the list – that her mum actually makes the medals that are given out every year.

M.I.A. explained why being honoured is all that more special to her on Instagram, as she said: ‘I’m honoured to have this honour, as it means a lot to my mother. ‘I want to honour what my mum has spent many hours of her life doing! She is one of the 2 women in England who hand stitched these medals for the last 30 years. After receiving asylum, my mum and cousin took this job in 1986 because it was the only non-English speaking manual labour she could find.’

M.I.A. continued: ‘She spent her life in England hand sewing 1000s of medals for the Queen. No matter how I feel or what I think, my Mother was extremely proud of the job she had. ‘It’s a very unique situation for me where I get to honour her most classiest minimum wage job ever.’ While M.I.A. was born in London, she spent her childhood growing up in Sri Lanka but civil war led to her family seeking refuge in London when she was 10 years old. The rapper brought her mum along, who actually hand stitches the medals