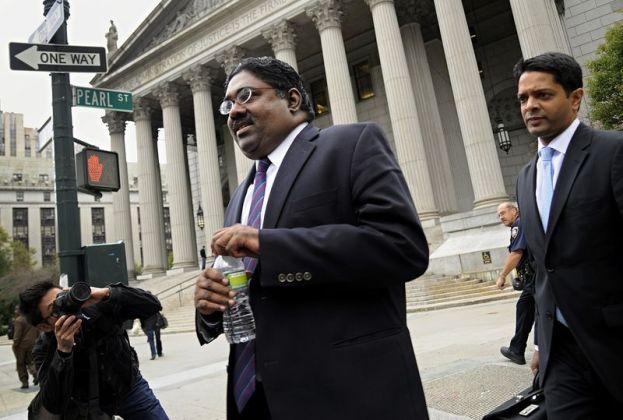 jaratnam, whose Galleon Group LLC once managed more than $7 billion, is back with his family on a quiet block of Manhattan’s East Side, where he’s mostly confined to his apartment for the remainder of his sentence. He’s free to work outside his home during the day.

Rajaratnam, 62, was sentenced to 11 years behind bars following his 2011 conviction, and he served his time at the Federal Medical Center Devens, a medical prison outside Boston. He is a beneficiary of the 2018 First Step Act, which allows some federal inmates who are over 60 years old, or who face terminal illnesses, to serve the end of their sentences at home.

Rajaratnam, who became a billionaire after co-founding Galleon, was perhaps the highest-profile figure ensnared in a years-long crackdown on insider trading at hedge funds. Arrested in an early-morning FBI raid in October 2009, he was in the first wave of defendants charged by federal prosecutors in New York, with dozens of other traders, executives and company insiders accused in the years that followed.

The native of Sri Lanka applied for home detention and was released this summer, according to a person with knowledge of the matter who asked not to be named. Rajaratnam reported to Devens in December 2011, becoming inmate number 62785-054.

The move from prison wasn’t announced by the U.S. Bureau of Prisons or by Rajaratnam’s legal team, and only became apparent after his location on the bureau’s public website was changed from Devens to “New York RRM,” an administrative unit that oversees inmates in halfway houses and on home detention.

Rajaratnam was due to be released July 4, 2021, according to the BOP website. More than 240 applications for home confinement for “elderly offenders” have been granted under the First Step Act, according to the bureau. Rajaratnam isn’t required to wear an electronic-monitoring device to keep tabs on his location.

After 12 days of deliberations, a jury in New York found Rajaratnam guilty of 14 counts stemming from a seven-year plot to trade on inside information from corporate executives, bankers, consultants, traders and other insiders. Among his tipsters was Rajat Gupta, then a board member at Goldman Sachs Group Inc., who later went to prison for leaking secrets to Rajaratnam. Prosecutors said he generated more than $72 million from the illicit tips.

Rajaratnam was defended by John Dowd, a Washington lawyer who went on to represent President Donald Trump during part of Special Counsel Robert Mueller’s inquiry into Russian meddling in the 2016 election.