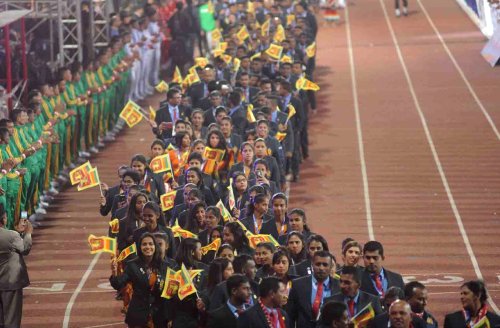 Sri Lanka added another gold, two silvers and four bronze medals to their tally and finished third overall in the final medal count as the 13th South Asian Games (SAG) came to an end at the Dasarath Stadium in Kathmandu.   Pugilist Rumesh Sandakelum defeated Nepal’s Ganesh Pradhan in the Men’s Light Heavyweight 81kg class to give Sri Lanka’s 40th gold medal on the final day of the SAG.   This took Sri Lanka’s final medal haul to 250 inclusive of 83 silver and 127 bronze medals. 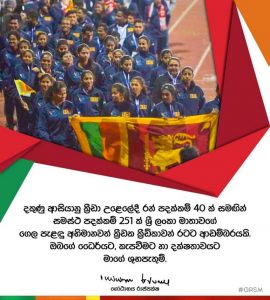 In the semi-final, Nepal’s Pradhan became the first boxer in the whole competition to beat an Indian rival but Sandakelum’s entry to the final became the talk of the town when he knocked down Pakistan’s AIBA World Boxing Championship pugilist Uvaiz Ali Khan comfortably.   This surprise blow to the much favoured Pakistani boxer made the Sri Lankan finalist the favourite to win the gold medal in the the Men’s Light Heavyweight 81kg class. Today Sandakelum had very little work to do to realize his dream of a gold medal, when he continued his winning streak to culminate with a gold against the Nepali boxer.

Sri Lanka had to settle in with a yet another silver medal in Men’s Basketball after India comprehensively beat them 101-62 to win the gold medal at the Covered Hall in Tripureshwor today. The Lankan cagers will now return home with a tally of two silver medals – from today’s Men’s game and the Women’s 3×3 and a bronze medal in the Men’s 3×3.

Today was not Sri Lanka’s day as the Indians proved to be highly dominant against the Lankan cagers.   The first quarter was a closely battled one though India led it 26-14. India further expanded the deficit of 12 points as the game progressed. The second and third quarters ended at 51-24 and 79-35 after India added 25 and 28 points to their tally while Sri Lanka managed to secure 10 and 11 points respectively.

However India were totally outdone by the Lankans in the fourth and final quarter. The sudden strike perhaps came in too late for the Lankans, who totally outwitted the Indians and added 27 points to culminate with a total of 62 points. Despite holding India to 22 points in the final quarter, they were well ahead ending with 101 points and a lead of 39, to claim the gold medal.

Sri Lanka’s P. Charith and Indian skipper Bhri Gubanshi top scored for their respective teams with 17 points each in the game. P. Udayanga (11), C. Kusal (10) and C. Joseph (10) made worthy contributions while skipper U. Praneeth was outstanding as an offensive player for Sri Lanka. For India Amritpal Singh and A. Annadurai scored 15 points each while Hafiz Bek and PrasannaSivakumar made 13 points each.

Following the completion of all sports activities, the closing ceremony of the 13th South Asian Games was held at the Dasarath Stadium in front of a packed crowd. The event was filled with Nepali cultural items and the remaining sports teams’ representatives of each participating country, which took place for almost three hours.   At the end of closing ceremony the Deputy Prime Minister of Nepal, IshworPokharei is scheduled to hand over the International Olympic Flag to a representative from the next hosting country of the South Asian Games.

Out of the 14 Sri Lankan athletes hospitalized in Nepal for dengue, only four remain yet to be discharged. The athletes who are still under observation are Amasha de Silva, M.U. Kumara and S.P. JanakaBandula and a kabaddi player. Sprinter Nadeesha Ramanayake, who was one of the first to be hospitalized here in Kathmandu, was discharged after her platelet count improved on Friday evening, but was readmitted after experiencing fever a day later. Ramanayake’s condition was constantly observed by Dr. Lal Ekanayake, the Team Doctor of the Sri Lanka contingent. After her conditions improved and was proven fit, Ramanayake was discharged on Tuesday night.

Women’s footballer Gayathri Nanayakkara, whose condition was critical earlier was discharged after her platelet count improved. She was earlier treated in the Intensive Care Unit (ICU). A total of 10 athletes have been discharged from the Blue Cross Hospital in Kathmandu, located few metres away from the main venue, the Dasarath Stadium and the Vayodha Hospital, few miles away.Six of them were sent back to join their respective teams by Monday night. Out of the four athletes remaining in hospital, three are being treated in the normal wards while the kabaddi player is currently treated in the ICU.

According to the observations made by Dr.Ekanayake, the dengue fever was initially generated from Colombo, not Nepal. He said that the Sugathadasa Sports Hotel could have been the originating place of dengue as a total of five athletes were detected with the fever when they were housed prior to the SAG.

The news of Sri Lankan athletes being hospitalized with dengue became a big news in the Nepali print and electronic media. After the news reached Colombo, the incumbent Minister of Sport, Dallas Alahapperuma had made a personal visit to the Sugathadasa Sports Hotel and pledged that he would act promptly to rectify matters and promised stern action those who ignored pleas madeby experts.

Hundred of journalists who had visited Kathmandu, Nepal to cover the 13th South Asian Games staged a silent protest against the Nepali Police, for assaulting a local photo journalist.   According to a Nepal journalist, who organized the protest prior to the closing ceremony, the photo journalist was deliberately manhandled by the police officials, when he was capturing a scuffle where spectators were engaged in a brawl to buy tickets for the Men’s football final match between Nepal and Bhutan.

“While baton-charging the unruly spectators on the road, the police officers dragged the photo journalist inside the stadium premises and assaulted him severely until he bled. He had shown his official identification cards and documents, but they never bothered about any of those. His camera equipment was also slightly damaged,” the local senior sports journalist stated.   The photo journalist is currently being treated in a local Kathmandu hospital.