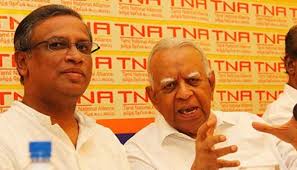 The Canadian Tamil Congress has called on all Tamils to cast their precious vote wisely at the forthcoming Parliamentary Election in Sri Lanka.
CTC said the Tamil people’s struggle for democratic rights in Sri Lanka has a long history and since independence the desire of Tamils to live as a free people has not been diminished by the many setbacks and the tests of endurance faced by Tamils in their onward march for justice, dignity and equality.
“The manner in which the Tamils of Sri Lanka fought for liberty underwent many changes over the decades. In the beginning the Federal party led the Tamil struggle with a programme of non-cooperation with the State based on the Ghandian model. The conspicuous lack of success of the non-violent movement to win equal rights led to an armed struggle that escalated into a 30 year civil war with the Sri Lankan state,” CTC said.
CTC noted that from the end of the civil war in May 2009, the Tamil National Alliance (TNA) has provided leadership to resist the actions of an unjust State and promote the aspirations of a beleaguered people by searching for cooperation to create a framework for a just society in which all Sri Lankan communities can live peacefully.
“In the last Parliament, the Tamil political leadership sensibly cooperated with other progressives in the South and with the help of the international community attempted to lay the foundations for a more equitable society by generating policies based on universal humanitarian principles and creating institutions to implement them. Progress unfortunately, was tardy and minimal. Whilst these small forward steps provided some breathing space they were insufficient to bring meaningful relief to the Sri Lankan Tamil community,” CTC said.
CTC noted that the Sri Lankan political terrain is a difficult place to negotiate political outcomes based on universal humanitarian principles.
“The hallmark of the present political culture in Sri Lanka is the absence of the rule of law, a compromised judiciary, a submissive press and the militarisation of the executive. The current political structure is not conducive for meaningful change in the future for the establishment of a just and equitable society. We can see dark clouds gathering in the horizon which threaten to further weaken Sri Lankan society as a whole and particularly impact on the Tamils,” CTC said.
CTC noted that Tamils in Sri Lanka are a marginalised community and have specific political needs and aspirations but have limited electoral strength.
“It is vital that Tamil votes are not split and thereby weaken the community’s Parliamentary representation. It is therefore, important that the Tamils elect a principled and powerful group of parliamentarians who could represent the community in both the North and the East and effectively use their collective strength to advance Tamil communitys’ interests. At the present time, this could be achieved by strengthening the existing Tamil political leadership which is the Tamil National Alliance (TNA),” CTC said.
The TNA under the leadership of R. Sampanthan, has earned the recognition and respect of the international community including Canada, USA, EU, UK, Australia and India. It is widely accepted that it has carefully and consistently articulated the concerns, grievances and aspirations of the Tamil people.
The Canadian Tamil Congress has also worked closely with TNA and its spokesperson M.A. Sumanthiran in particular at the United Nations Human Rights Council (UNHRC) in Geneva. CTC has also worked with other TNA members on economic development efforts in the war affected Northern and Eastern provinces of Sri Lanka.