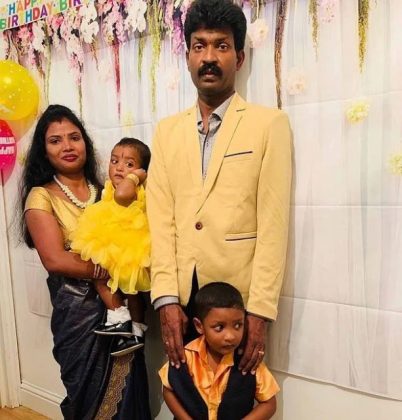 A Sri Lankan man has reportedly stabbed himself in the neck after allegedly knifing his two kids to death at their East London flat, The Sun reported today.
Nitin Kumar, 40, remains in a critical condition in hospital after allegedly killing his two children, aged one and three, in Ilford on Sunday.
According to hospital sources, the dad-of-two sustained a severe cut to the neck after he “exploded” during lockdown, when he is believed to have killed Pavinya Nithiyakumar, aged 19 months, and three-year-old Nigish Nithiyakumar.
The shopworker reportedly then turned the knife on himself – but due to his condition, is yet to be formally interviewed by police.
Heartbroken mum Nisha found her toddler son, Nigish, in the bathroom gasping for breath after the horror on Sunday night, athirvu reports.
In a double tragedy, she then discovered one-year-old daughter Pavinya stabbed to death in her bed – just 90 minutes after Kumar had returned home from work as a shopkeeper.
She told the Mail: “I was in the bathroom and could hear one of my children vomiting.
“I rushed into the bedroom and when I saw them covered in blood, just started screaming. I was shouting ‘what have you done to them, what has happened?’
“I rushed to the fridge to get some ice because I could see that my son had a deep cut to his neck. Blood was gushing out of it. I ran back into the bedroom and started applying the ice to his neck. He was barely able to breathe and was wheezing heavily.
“My daughter was not moving at all. There was blood all around her. All I could think about was how to save them.”
She then dashed into the bathroom and called 999.
Horrified neighbours heard “tortured” screams as Nisha ran into the street shouting: “Help me…it’s my children”.
Cops then brought out the baby girl in a tiny body bag from the flat as paramedics desperately tried to revive her brother on the street with CPR.
Nigish was taken to hospital by air ambulance but later pronounced dead.
Stunned witnesses told how the children’s traumatised mother was led away screaming by police.
She is currently staying with her sister Rajani in West London.
Local Intisar Ahmed said: “I heard a horrible screaming and went outside to see what was happening.
“I saw emergency services take the little boy outside and lay him on the footpath and give him CPR. My friend said he was covered in blood.”
Kumar and his wife originally came from Sri Lanka and moved into the flat just over a year ago but had been rowing recently due to the lockdown.
He was employed at a convenience store near his home and spent the day working there before leaving at around 4.30pm to return to his family.
His employer, Shanmugatha Thevadurai, 54, said “Everything was normal. Nithi was a wonderful man and a loyal worker.
“He opened the shop at 9am, worked a normal day and made me tea shortly before he left.
“He had been telling me how his wife was not happy that he was still going out to work in the lockdown.
“There were four of them in a tiny, cramped flat and I think things just got too much for him