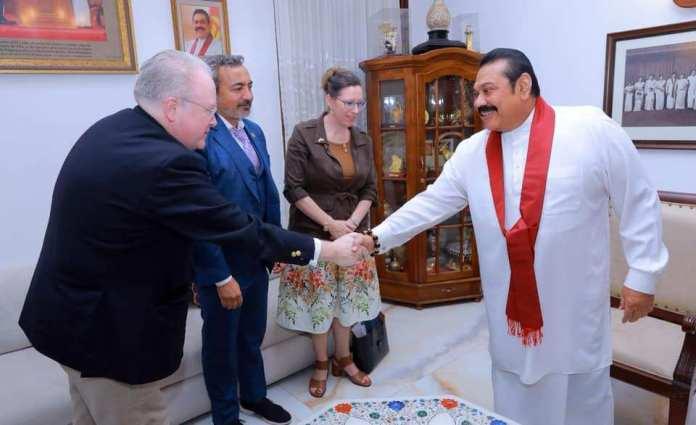 Visiting US Congressmen Ami Bera and George Holding met Prime Minister Mahinda Rajapaksa in Colombo this morning (Feb. 15) and discussed ways of strengthening relations in a number of sectors.
This is the first meeting between US officials and Sri Lanka after the US designated Lieutenant General Shavendra Silva, current Commander of the Sri Lanka Army and Acting Chief of Defense Staff, as required under Section 7031(c) of the Department of State, Foreign Operations, and Related Programs Appropriations Act, due to credible information of his involvement, through command responsibility, in gross violations of human rights, namely extrajudicial killings.
“I think this is the most vibrant region and has a lot of potential,” Congressman Bera said during his meeting with the Prime Minister. “We see opportunity to forge a strong relationship between the United States and Sri Lanka.”
Congressman Bera represents California’s 7th Congressional District in the US House of Representatives and is currently a member of the House Foreign Affairs Committee where he serves as Chair of the Subcommittee on Asia, the Pacific, and Nonproliferation.
The Prime Minister stated that one of the key priorities for the country at this time is economic development and encouraged more US investments in Sri Lanka.
Congressman Holding agreed that there is real opportunity to strengthen economic relations, pointing out that there is foreign direct investments from Sri Lanka in his own state.
Representing North Carolina’s 2nd Congressional District, Congressman Holding serves on the House Ways and Means Committee, Budget Committee and Ethics Committee.
With his focus on trade and commerce, Congressman Holding said strong economic relations can often play a significant role in enhancing overall relations between two countries.
Rajapaksa said that he agreed that there is a lot of potential for investments from the United States to Sri Lanka as well as from Sri Lanka to the United States. Other areas of cooperation were also discussed, including in the sectors of counter terrorism, tourism and energy.
US Ambassador in Sri Lanka Alaina Teplitz who also attended the meeting, talked about Sri Lanka’s larger role in the region.
“We support a strong, sovereign Sri Lanka,” Ambassador Teplitz said. “We’re thinking about Sri Lanka’s role in the broader region.