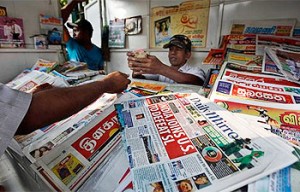 The World Association of Newspapers has raised concerns over some clauses in the Sri Lanka Press Council Act.
President of the World Association of Newspapers (WAN-IFRA), Vincent Peyregne, has sent a letter to President Gotabaya Rajapaksa congratulating him on his election as President of Sri Lanka with an overwhelming mandate from its citizens.
“We have noted with interest, several meetings you had with newspaper and other media heads and your assurances to them that there are no threats to media and they have the freedom to write factually,” Peyregne said.
He said that as the largest newspaper organization in the world with an international membership of more than 3000 media institutions, they welcome the President’s statements of assurances of media freedom as enshrined and guaranteed by Article 14(1 (A) in the Constitution of Sri Lanka which as stated, “gives every citizens the freedom of speech and expressions including publications”.
“We may point out that in the free world, democratic governments have permitted newspapers to be regulated on the principles of self-regulation rather than on statutory laws like Press Council Act, which includes a provision to jail publishers and editors,” the World Association of Newspapers said.
Peyregne urged President Rajapaksa to support the concept of self-regulation in Sri Lanka