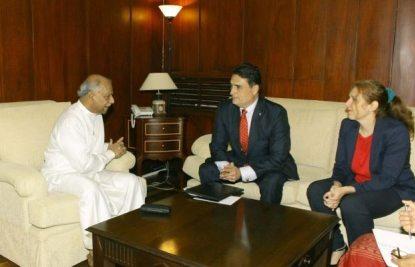 The Police and Criminal Investigations Department (CID) have launched an investigation into an incident involving a local staff member of the Swiss Embassy in Colombo.
Switzerland had yesterday slammed the kidnapping of one of its employees in Colombo and had summoned the Sri Lankan Ambassador to Switzerland to the Foreign Ministry in Bern to discuss the incident.
A local employee of the Swiss Embassy in Sri Lanka had been temporarily kidnapped and threatened by unknown assailants in what the Swiss Foreign Ministry has called was a “serious and unacceptable attack”.
The Sri Lankan Foreign Ministry today said that an investigation into the alleged incident has been launched. Yesterday (Wednesday) the Swiss Ambassador to Sri Lanka Hanspeter Mock had called on Sri Lanka’s new Foreign Minister Dinesh Gunawardena.
However it is not clear if the kidnapping incident was discussed at the meeting. According to reports the woman was kidnapped on Monday then held and questioned for two hours before being released.
The woman was reportedly threatened in order to force her to disclose embassy-related information. The attack was in connection with a high-ranking Sri Lankan police inspector who fled to Switzerland due to death threats.
The inspector had been investigating corruption and rights violations in connection with the entourage of newly-elected President Gotabaya Rajapaksa. He left Sri Lanka on Sunday and has requested asylum in Switzerland